As Ireland begins to show signs of recovery in 2014 from its demise 2008, it has become clear that reforms in the Irish administration are much needed. When the IMF, EU and ECB Troica intervened, many changes have been made such as adjustments in public spending and to reduce the debt to GDP ratio.

How government in Ireland is structured

For those not familiar with how the Irish government functions, power in Ireland is divided between the Executive power, legislative power and the judiciary. The Executive power is essentially the Irish government consisting of a number of ministers governing the various departments. The civil service in Ireland are referred to as the staff working in a permanent basis in the various departments of state.

The structure of Irish civil service 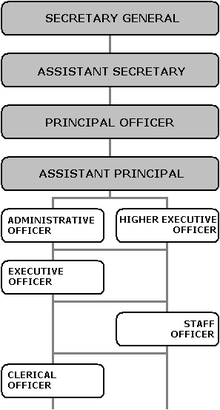 Above is the structure of the Irish civil service starting at the bottom, the clerical officer with the positions leading to the Secretary General, the highest position.  The minister or TD is the voted government member who is responsible and accountable for actions taken by the civil servants in his or her department.

Over the past weeks, the main news headlines consisted of the controversy surrounding the costs involved with setting up and running costs of Irish Water. Irish Water was set up as a requirement of Ireland’s bailout from the Troica. There was been public outrage over the enormous costs so far incurred. A staggering €50m has gone into consultancy fees, before any salary payments or for the purchase of water meter units. It has been reported that 29 executives at Irish Water will be earning over €100,000.

What those figures outline is that the wastefulness experienced by policies implemented by the civil service. The Irish civil service is an outdated inefficient service. If we go back to the structure above, there are just too many levels of management. At the lower level, where most of the policy work is done, there are just too many levels in which they are answerable too, in turn slowing the policy creation process. At the higher level, the decision makers they are in reality not answerable to a higher authority other than the TD. The TD has too many Dail sittings and PR duties to fulfil to be aware of decisions that those in his department make. To make the civil service more efficient, assistant roles must be cut from the secretary and principal officer. Executive officers and higher executive officers should also be cut.

The costs involved in the Irish Water saga are clearly made by the civil service. Wastefulness and inefficiencies remain a trait of the out dated system currently in place. Higher officials have too much power and they are over paid. If Ireland wants to make the most of the recovery currently being experienced,  a reform must be made sooner rather than later.